Skip to main content Skip to footer Skip to search 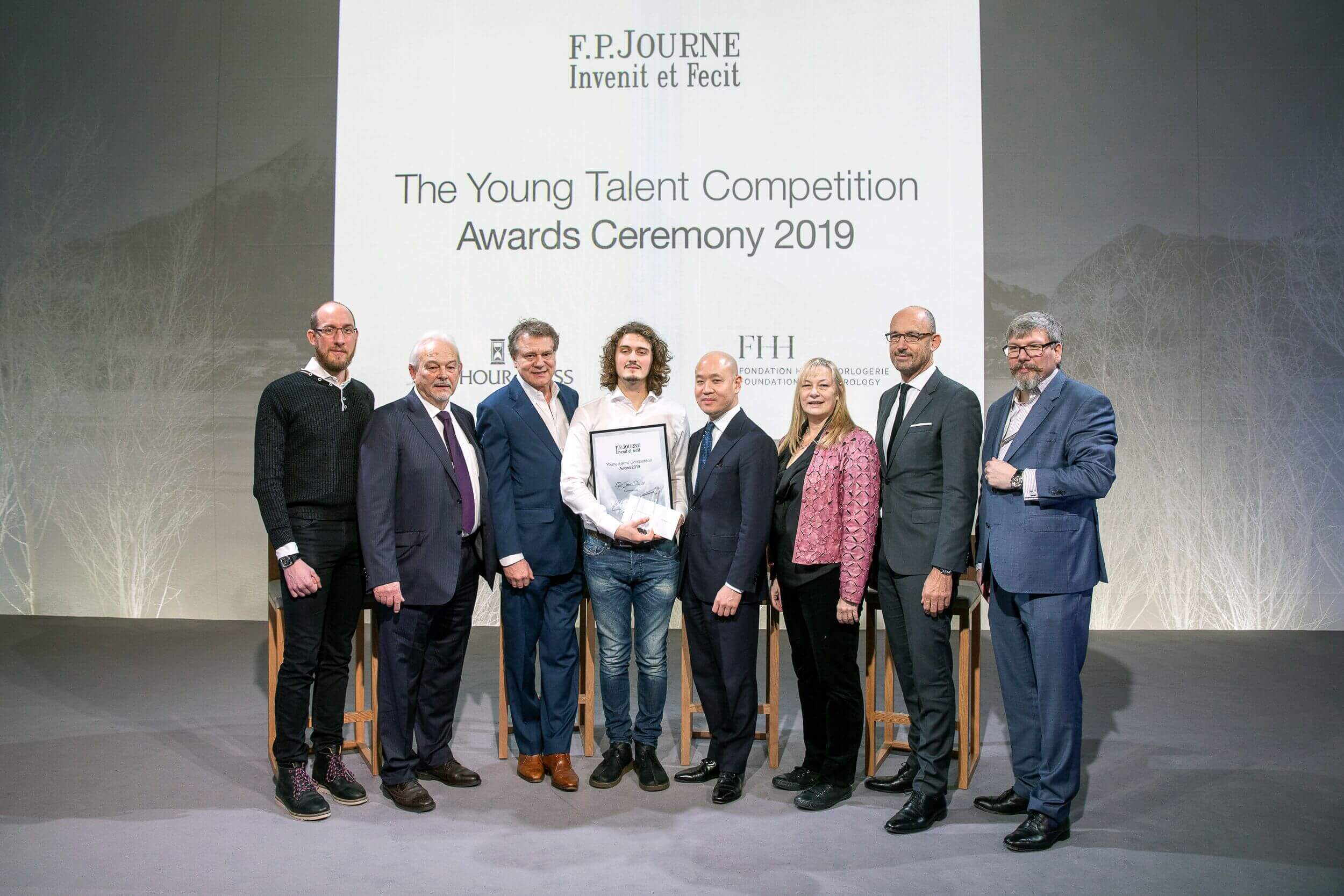 Since 2015, F.P.JOURNE's Young Talent Competition supports young watchmaking students and recent graduates to gain a foothold in the world of independent watchmaking.

It is organized with the support of The Hour Glass, luxury watch retailer in the Asia Pacific region.

We know the challenges faced by any aspiring watchmaker and our goal is to reward talent, making it known across the world and put their work under the spotlight.

The winner will be presented to the international press at the end of April 2022. Additionally, the winner will win CHF 20’000.- to purchase watchmaking tools or finance his/her horological project.

The winners will be rated using 4 criteria:

The winner of the Young Talent Competition will enjoy the following:

“It is not easy for youngsters to start. I was lucky to work at my uncle’s atelier when I was young and received the support of passionate horological actors. It is my turn to help them a little as I was helped at a young age.”

François-Paul Journe is the only three-time winner of the Aiguille d'Or grand prize from the Fondation du Grand Prix d'Horlogerie de Genève and one of the most recognized independent haute horology watch constructor in the world.

Kalender Perpeten - Movement with secular calendar based on his patented invention

Introduction_ “The idea for this clock with secular perpetual calendar came up in winter 2016, with a moon ball for the moon phase, and a time equation, wanting the clock movement to have a very long power reserve. The heart of the movement is the perpetual calendar, which automatically corrects even the uneven secular years. Controlled by a wheel that turns once every 400 years, the date needs no correction.

Brief story about the invention of Mario Scarpatetti’s “secular perpetual calendar”_ In 2013, I made a clock with classic perpetual calendar with a 4-year wheel but something bothered me. The mechanics may be leap years recognize between centuries, but not whether a century or millennium is a leap year or not. I started to think about a mechanism that could recognize whether a century or a millennium has a February 29th or not. In 2013, during a train ride, the solution came to me. My idea is to supplement the mechanics of a well-known perpetual calendar with an additional wheel that turns once every 400 years. The greatest achievement is the ease with which this 400-year wheel is switched.

Shortly afterwards, I was asked whether I would make a movement for the drive of a planetarium and I put my sketches in pending. In 2016, I finally found the time to design a clock with my own perpetual calendar. I started milling the first wheels in 2016 and the construction of the large movement lasted until summer 2018. During the production, in March 2018, I applied for a patent for my invention by the Swiss Federal Institute of Intellectual Property relating to a 400-year wheel and its indexing. My 400-year wheel received in 2018 the patent N° CH 00400/18.

Mario Scarpatetti’s secular perpetual calendar explained in detail_ “All components, such as the rocker switch (Schaltwippe), are exactly the same as in a known perpetual calendar with a 4-year wheel. The 4-year wheel is the first on my calendar that looks different. All 4 deepenings for February have the same depth. The 4-year wheel therefore does not decide whether February has 28 or 29 days. A shift finger (Schaltfinger) is pressed into the front of the 4-year wheel. This finger thus makes one turn every 4 years and switches the 400-year wheel further. The whole thing also works with two shift fingers, as I described in my patent application.

It gets interesting now at a century or a millennium. In the case of the gear wheel, there is a very large gap at the point where a step would be for three consecutive centuries. At this point, instead of two gaps, the gear wheel has only one gap in the width of three divisions next to a step. Only in the fourth century is there an elevation where the nose feels the century. Namely for those centuries which are a leap year. That is why the 400-year wheel has 97 and not 100 steps inside”.

A small example of the intelligibility_ 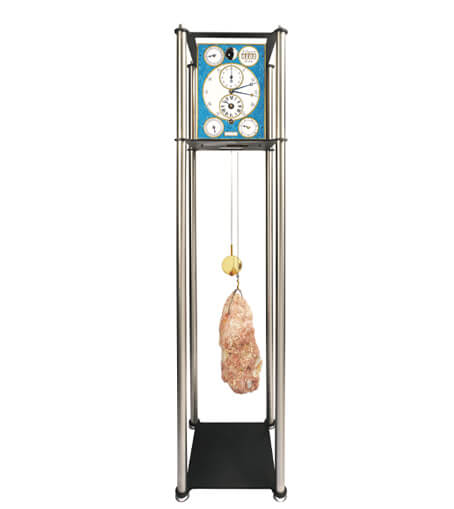 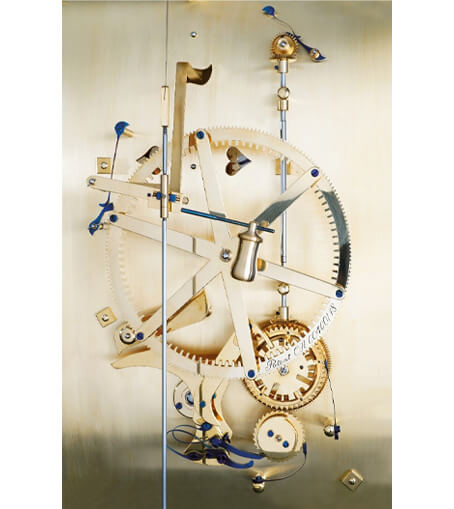 For his pocket watch Spherical moon and drum calendar

Project_ At my watchmaking school, I attended a course where applicants can make their own watch over a year and I chose to make this watch as a graduation production. I wanted to make this specific complication because I thought it would be interesting to make a watch with a large moon phase for an increased visibility. Since the disk type that is usually used has a large design limitation, I decided to display it as a sphere in order to be more visible.

Challenges_ The problem I was facing was that the vertical calendar display did not work as expected but the moon display worked smoothly. I also had a hard time redesigning and manufacturing the balance wheel. I am still working on improving the quick jump of the calendar. Made entirely of titanium, the moon phase is 20 mm in diameter and set via a recessed pusher in the case band. A third of the sphere is blue heated, while the other two thirds are coated in gold.

Shown in two large windows, each containing two drums for the digits, the calendar is a simple one, with the month in the left window and date on the right; both can be set via the crown. Because the calendar display relies on drums, rather than discs, it is driven by gears perpendicular to the plane of the movement.

Building the movement_ The movement is a mix of parts made from scratch as well as components from tried-and-test calibres. Amongst the parts I made are the base plate, bridges, and mechanisms for the calendar and moon phase. Most of going train, from mainspring to fourth wheel, are taken from the Valjoux 7750, long a favorite base movement for complications because of its robustness and reliable energy delivery. However, the escapement is from the Peseux 7040 because I wanted to run the movement at 3Hz instead of 4Hz to make the balance wheel larger. I then produced the four-armed balance wheel and paired it with a hairspring from the 7750. As a result, the balance bridge still retains the Etachron regulator index of the 7750. The movement is coated in 18K yellow gold, and finished with perlage and Côtes de Genève. Both the balance bridge and escape wheel cock are hand engraved. I also produced all of the external components of the watch. Though it appears to be engine turned, the dial was actually engraved on a lathe, as I did not have access to a rose engine. But the dial colour was achieved the traditional way, having been silver plated using diluted sulfuric acid. The hands were also made from scratch with a combination of heatblued steel and golden brass. 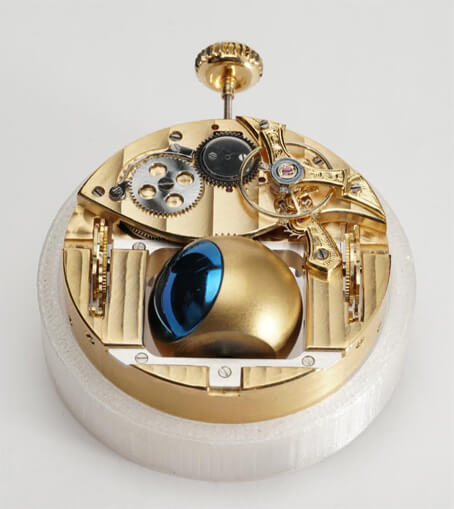 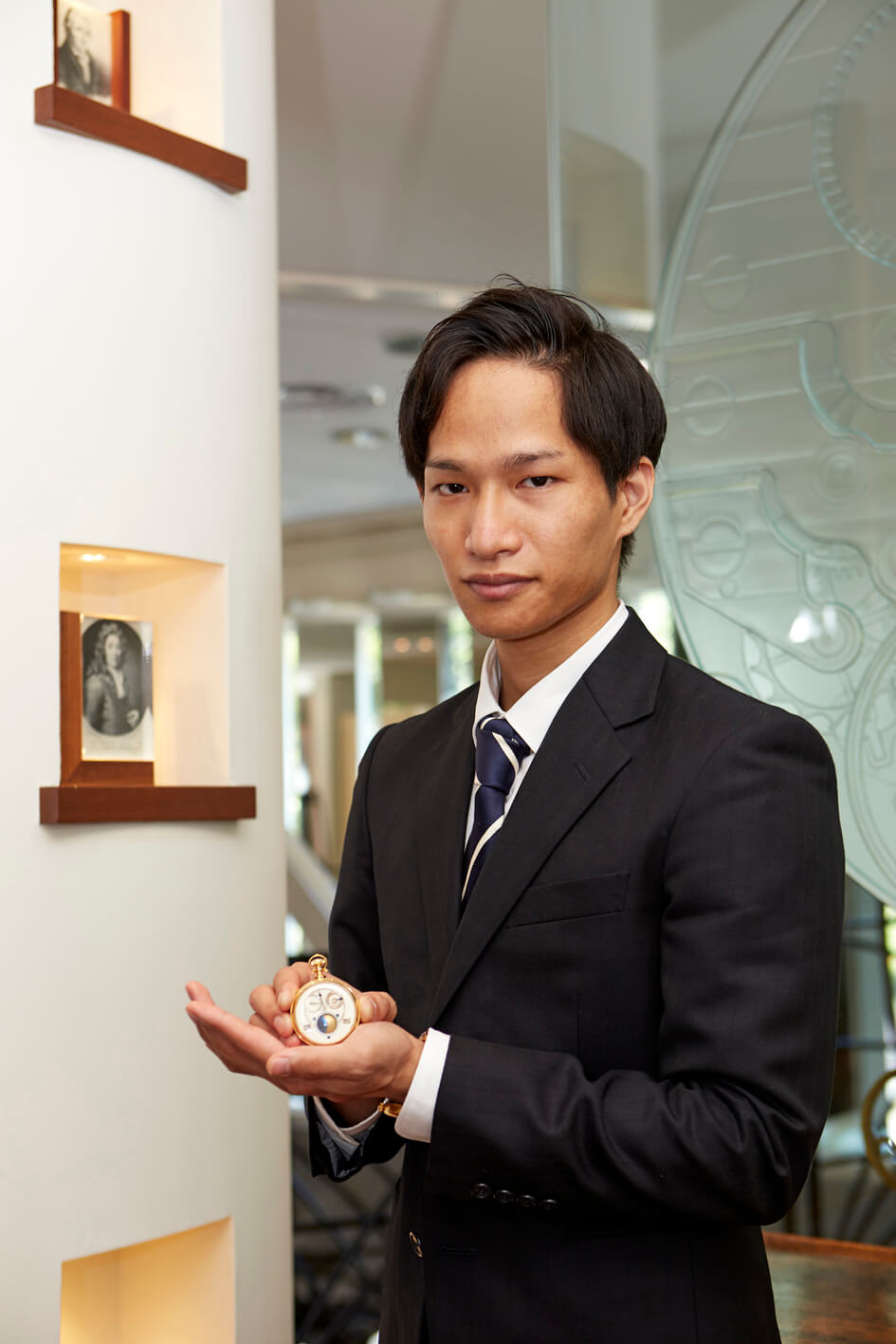 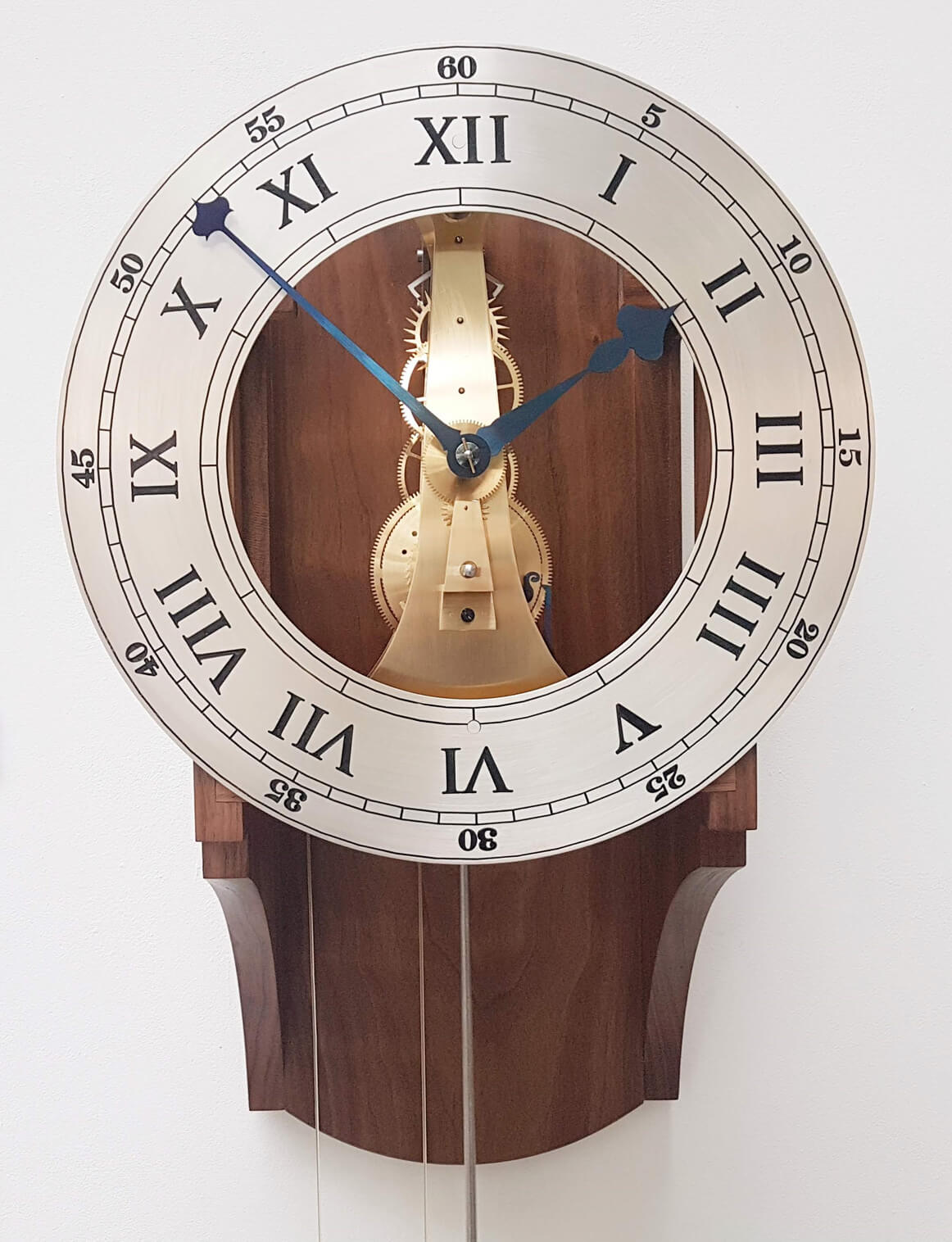 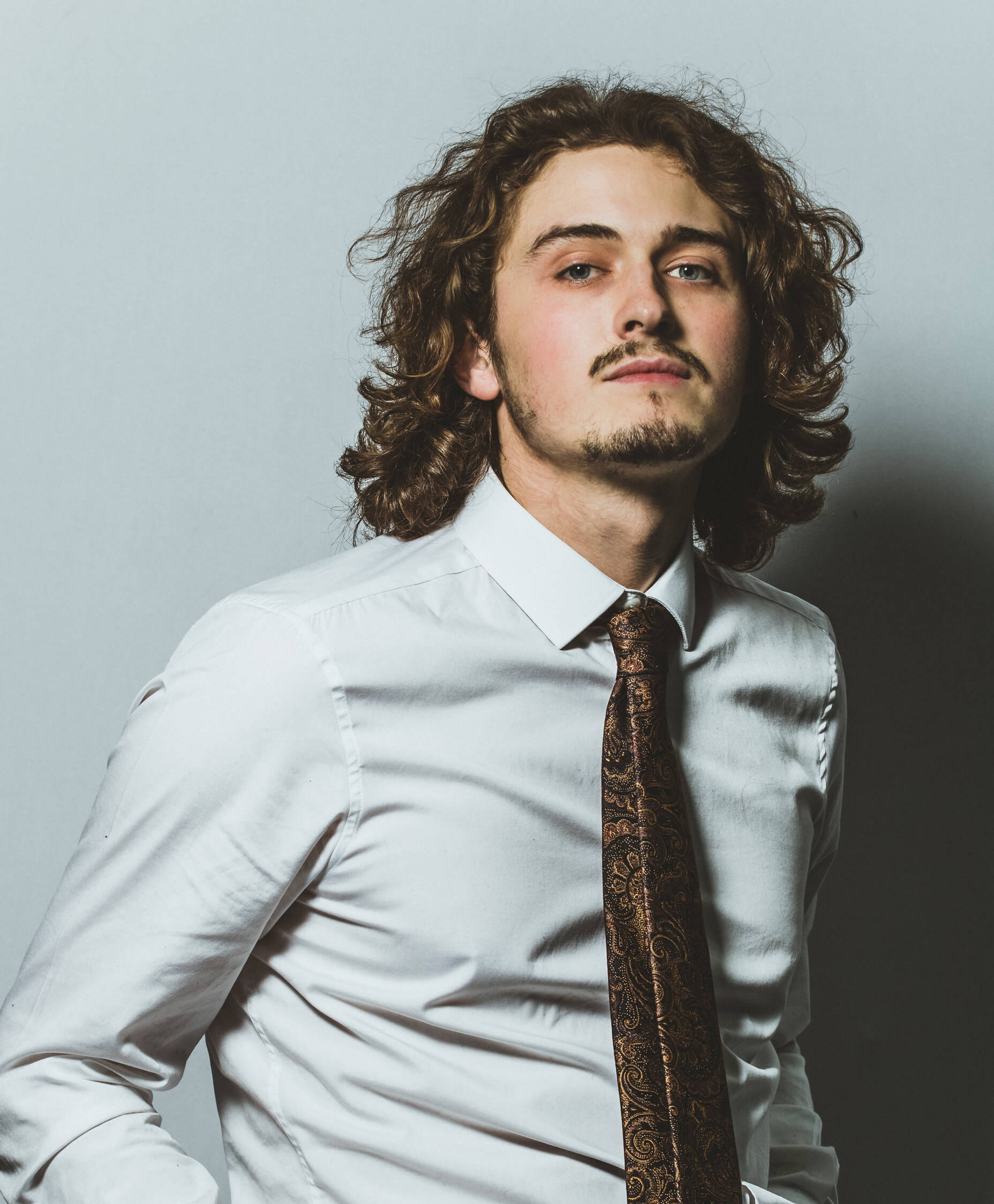 For his wristwatch Halley 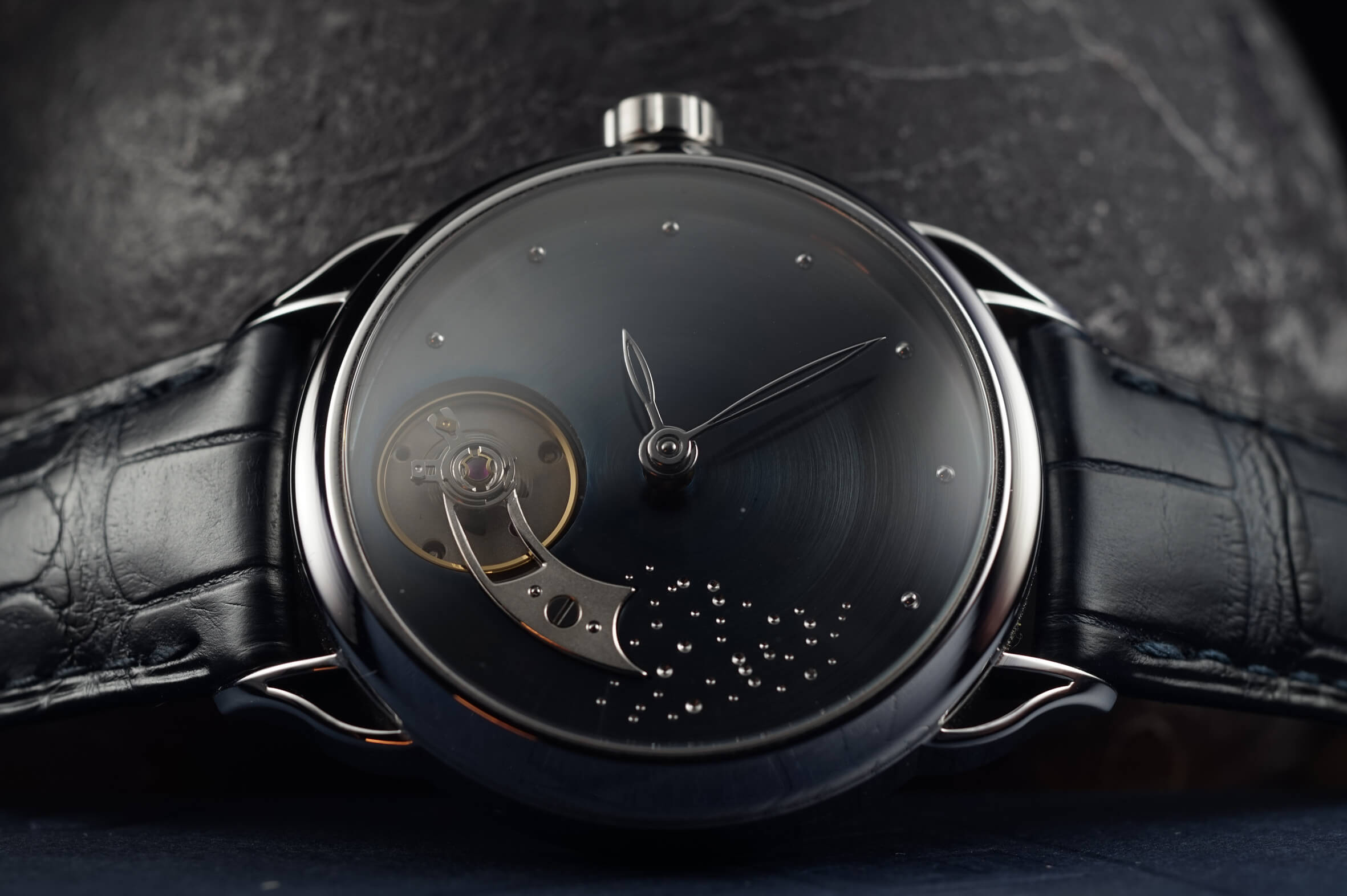 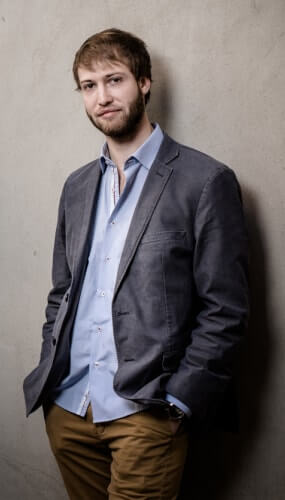 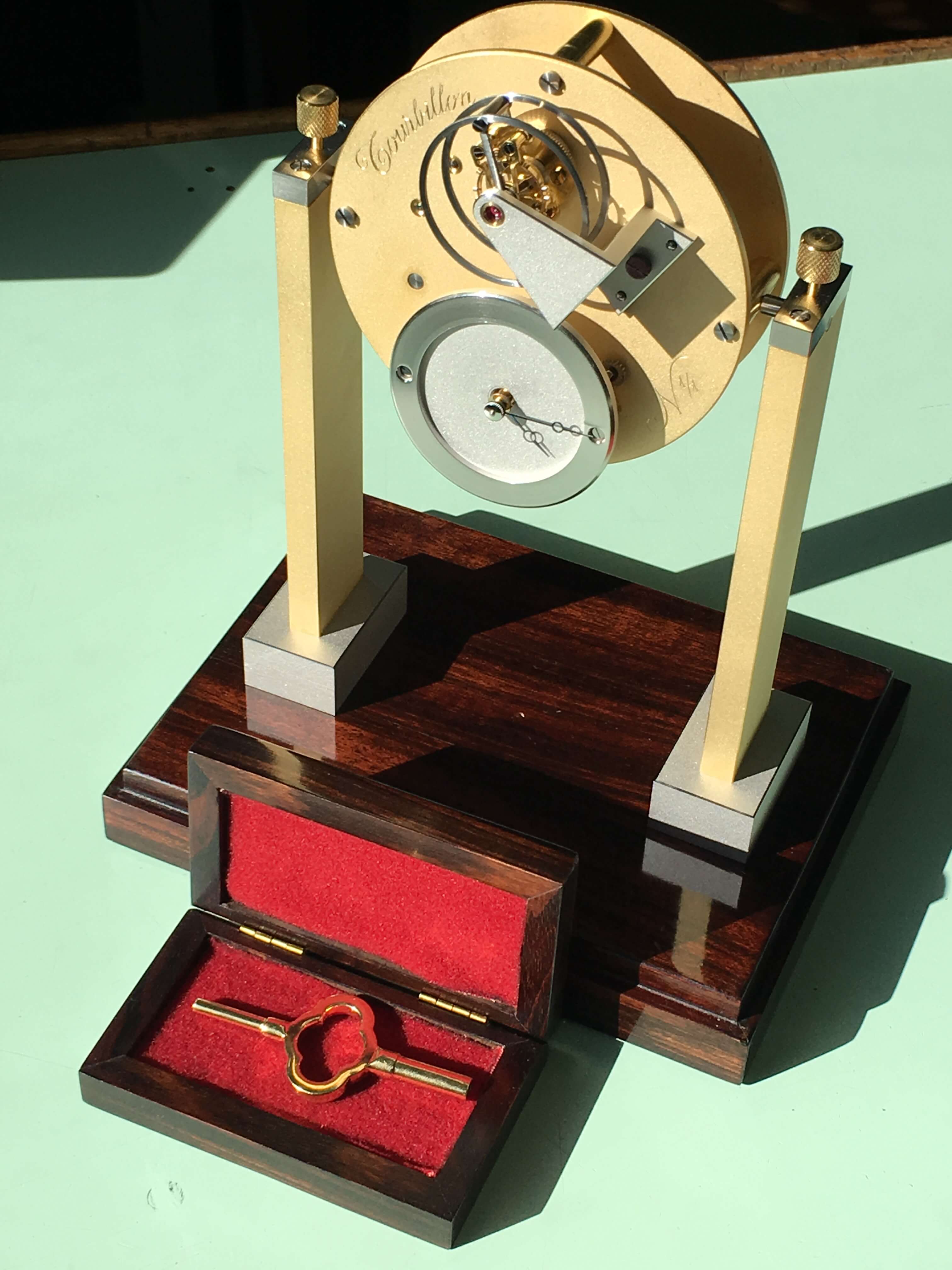 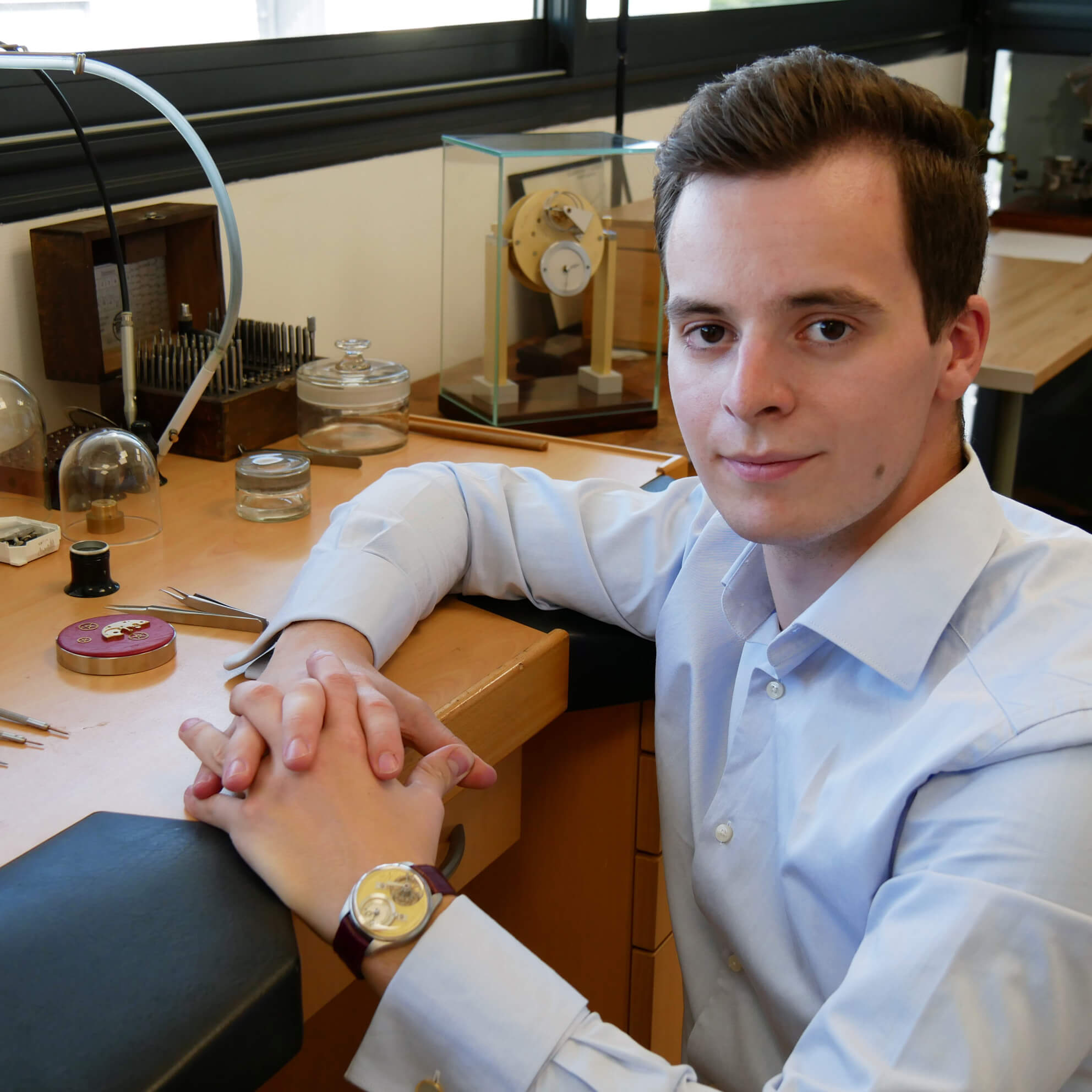 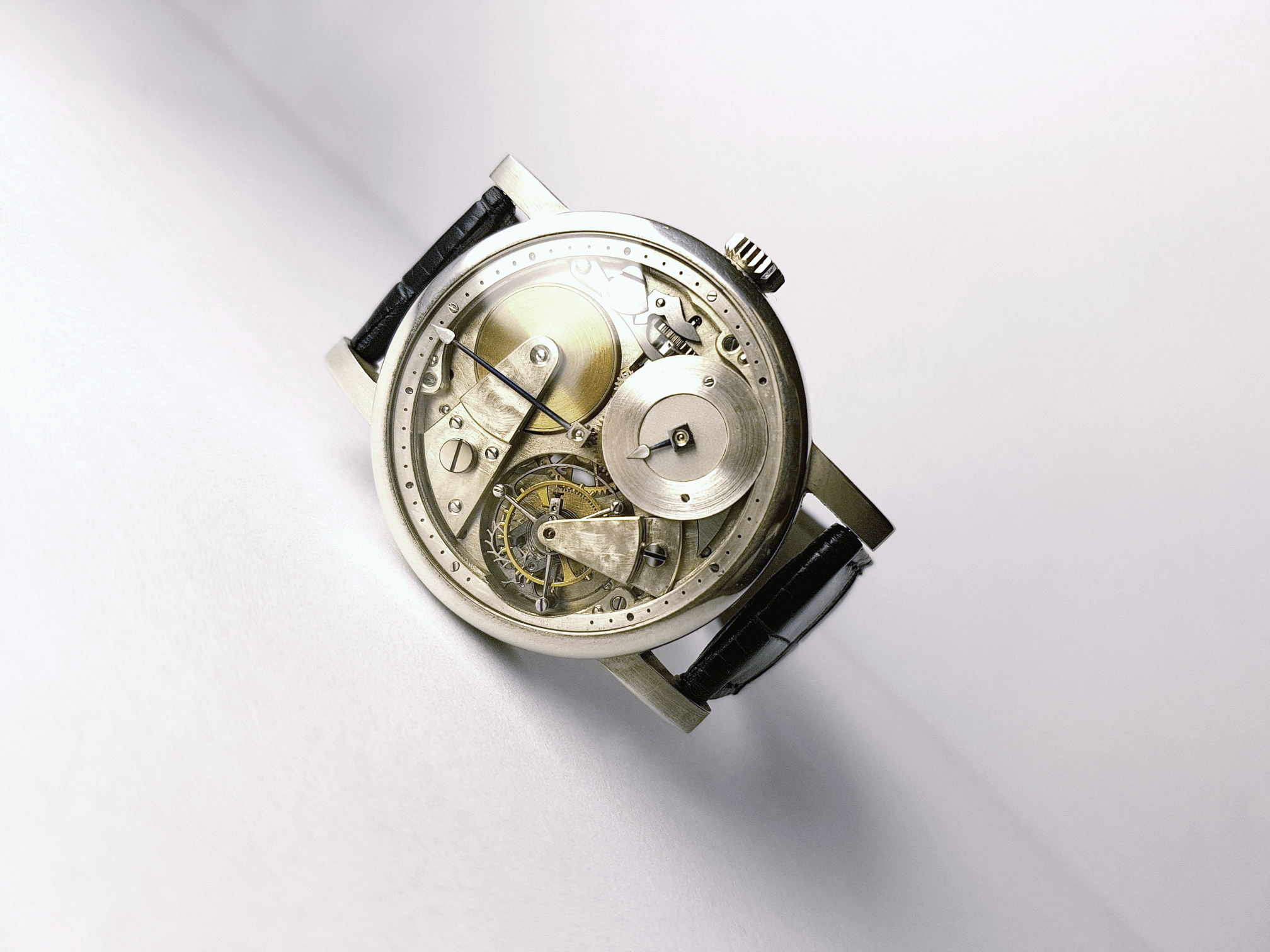 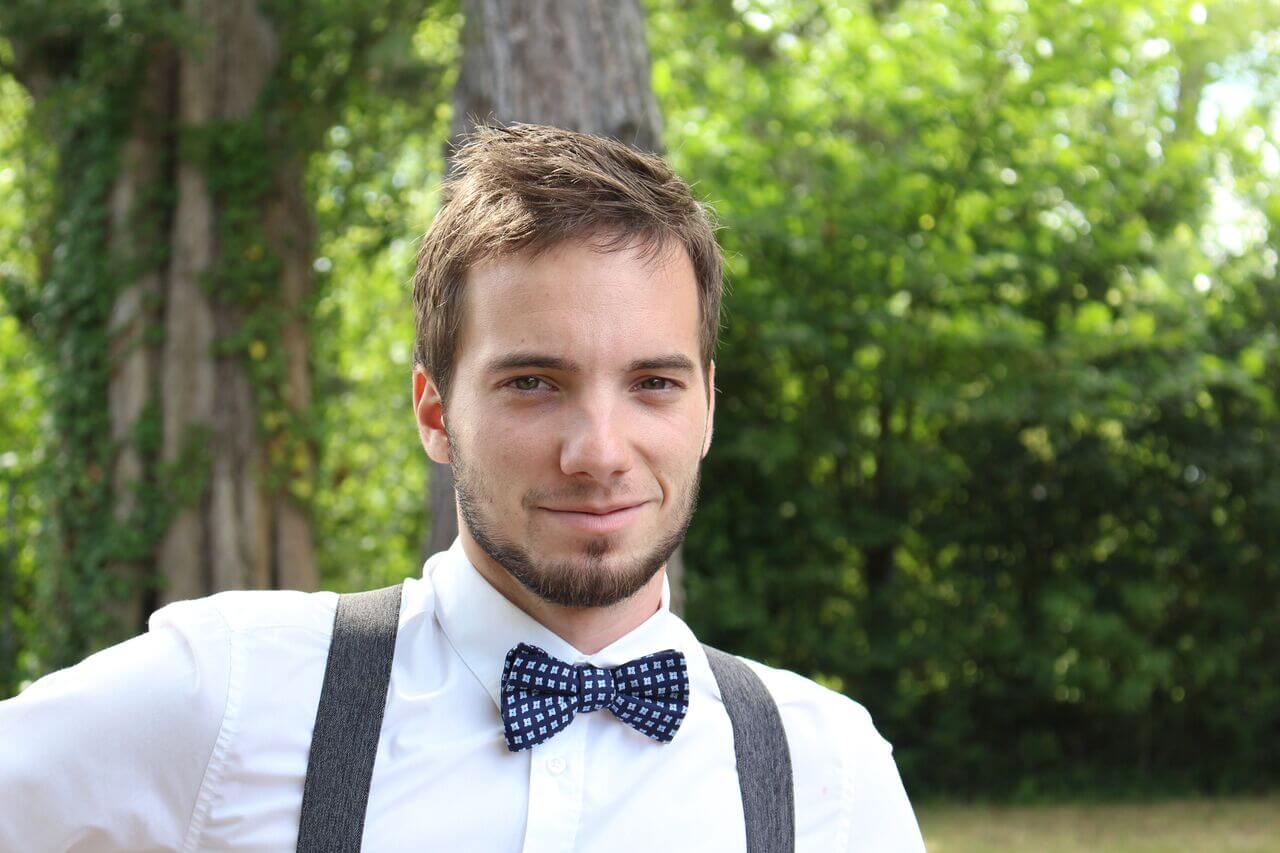 For his Clock with Linear Equation of Time

For The Horizon Clock

For his Clock with Triple Axis Tourbillon 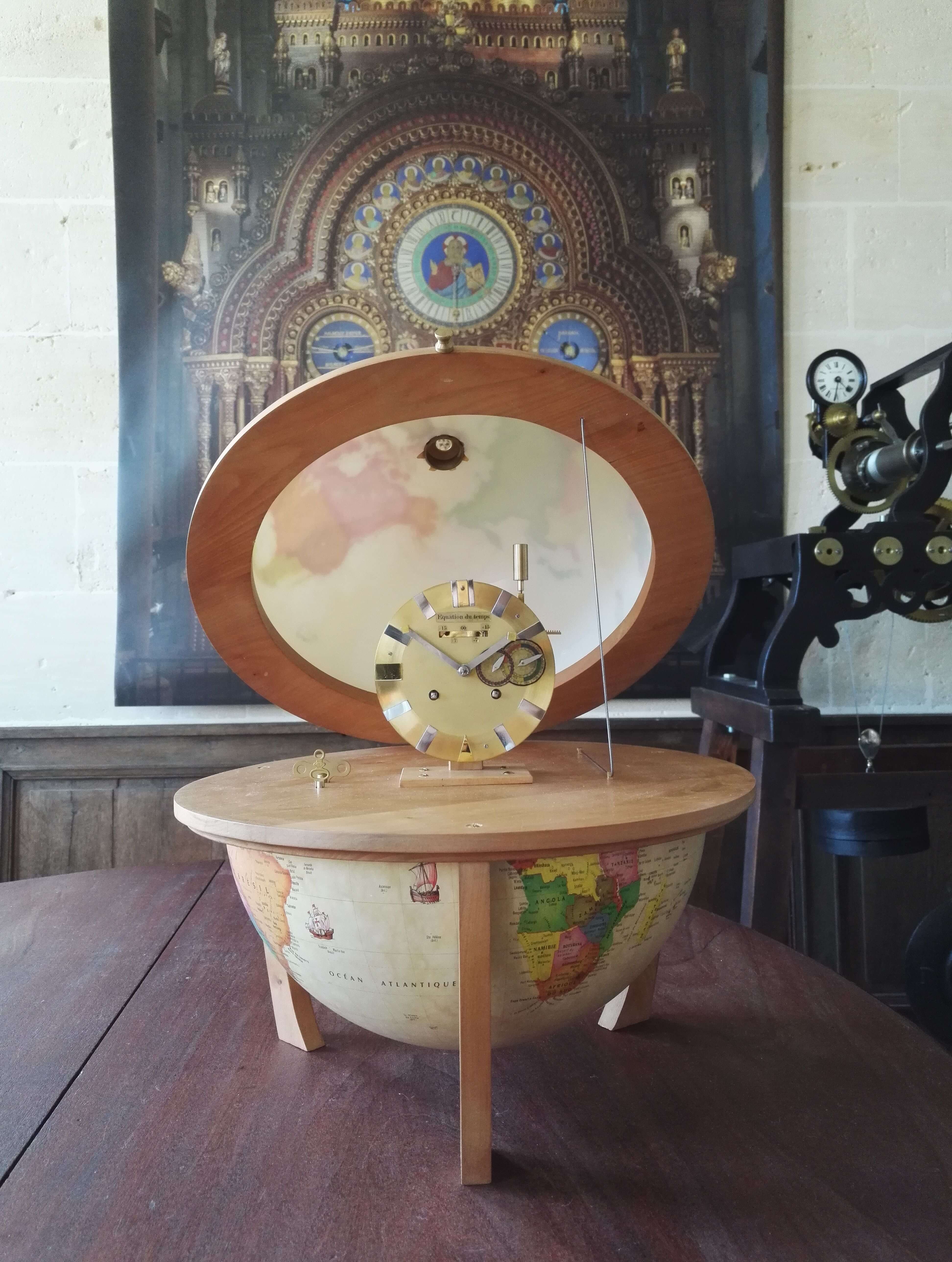 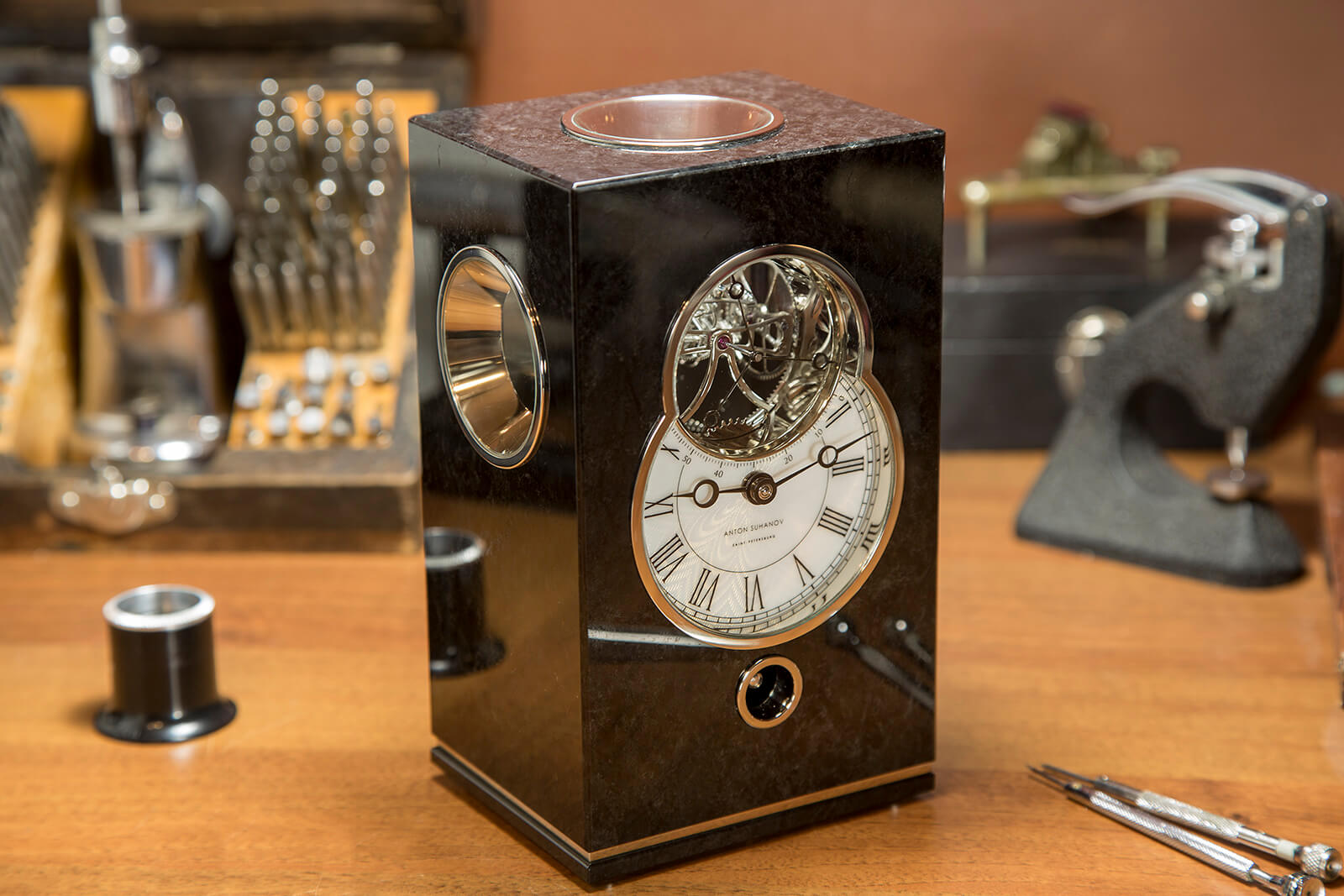 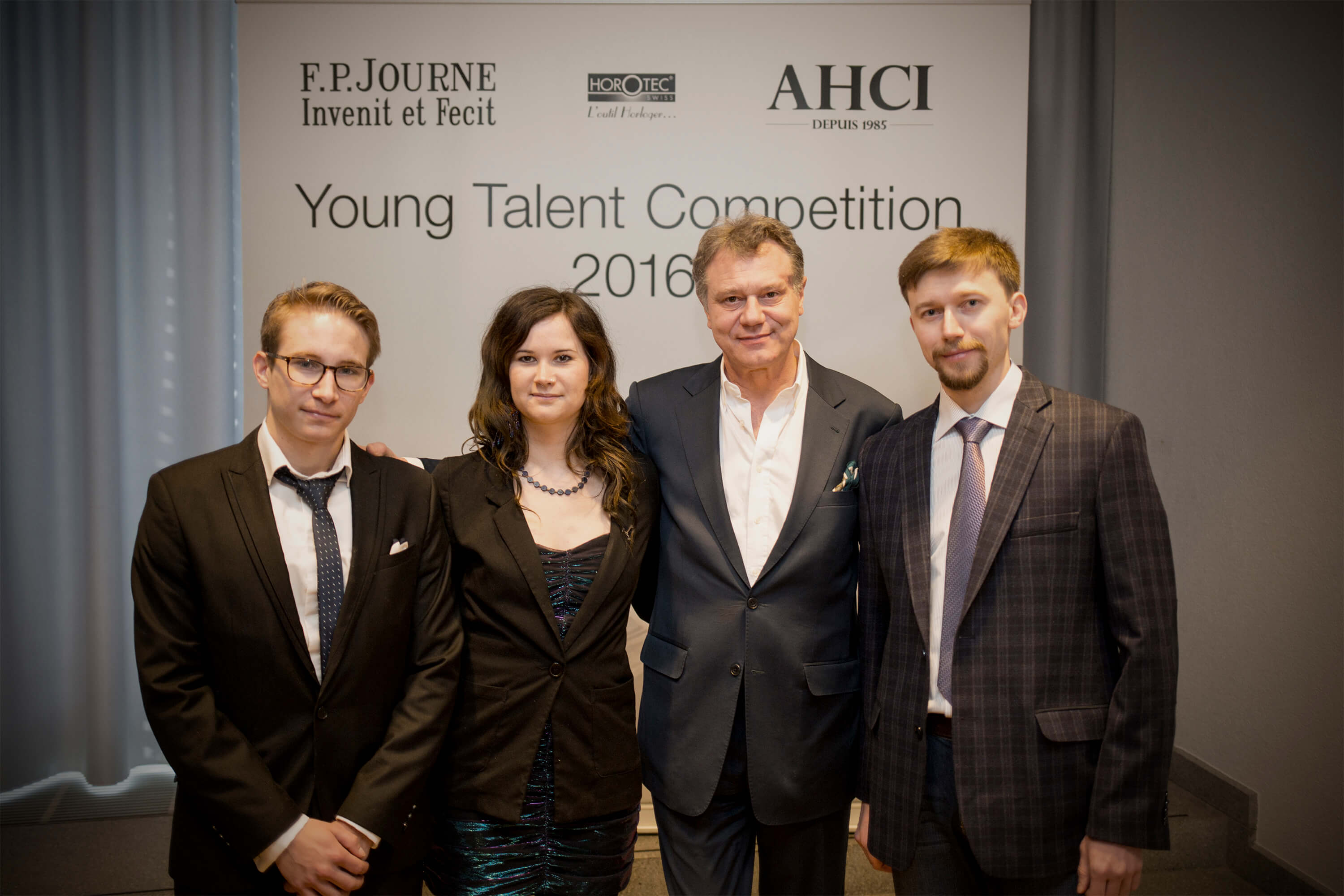 For their clock Tourbillon Model

For his clock Monsters from the Id

For his Retrograde Minute Indicator 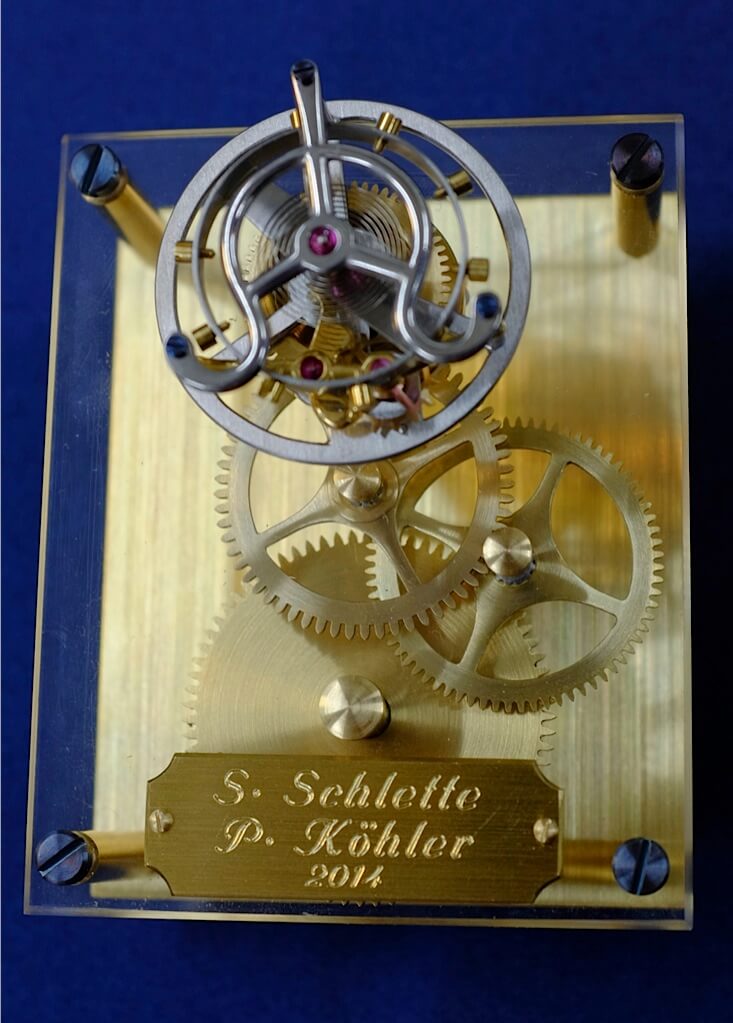 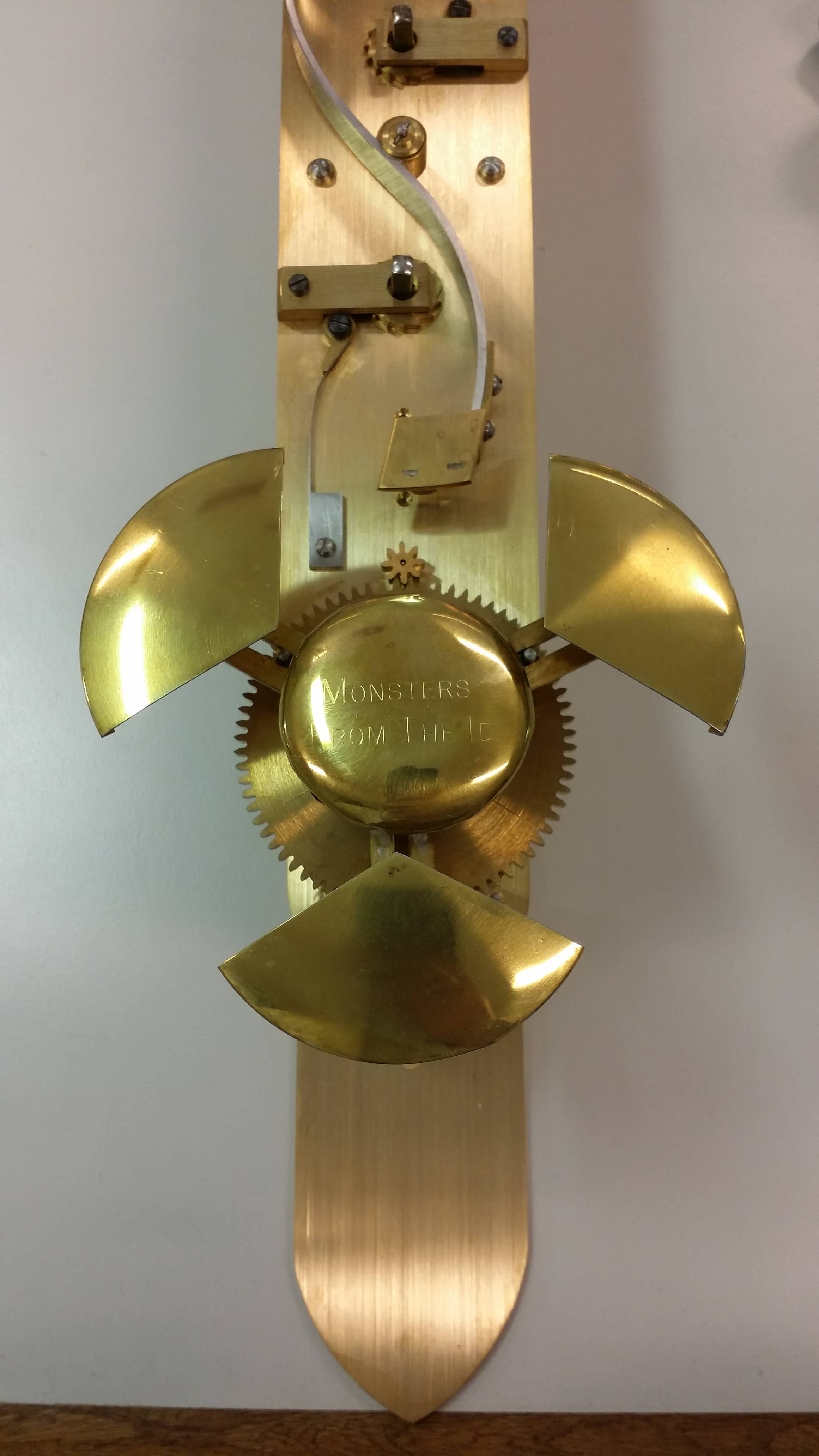 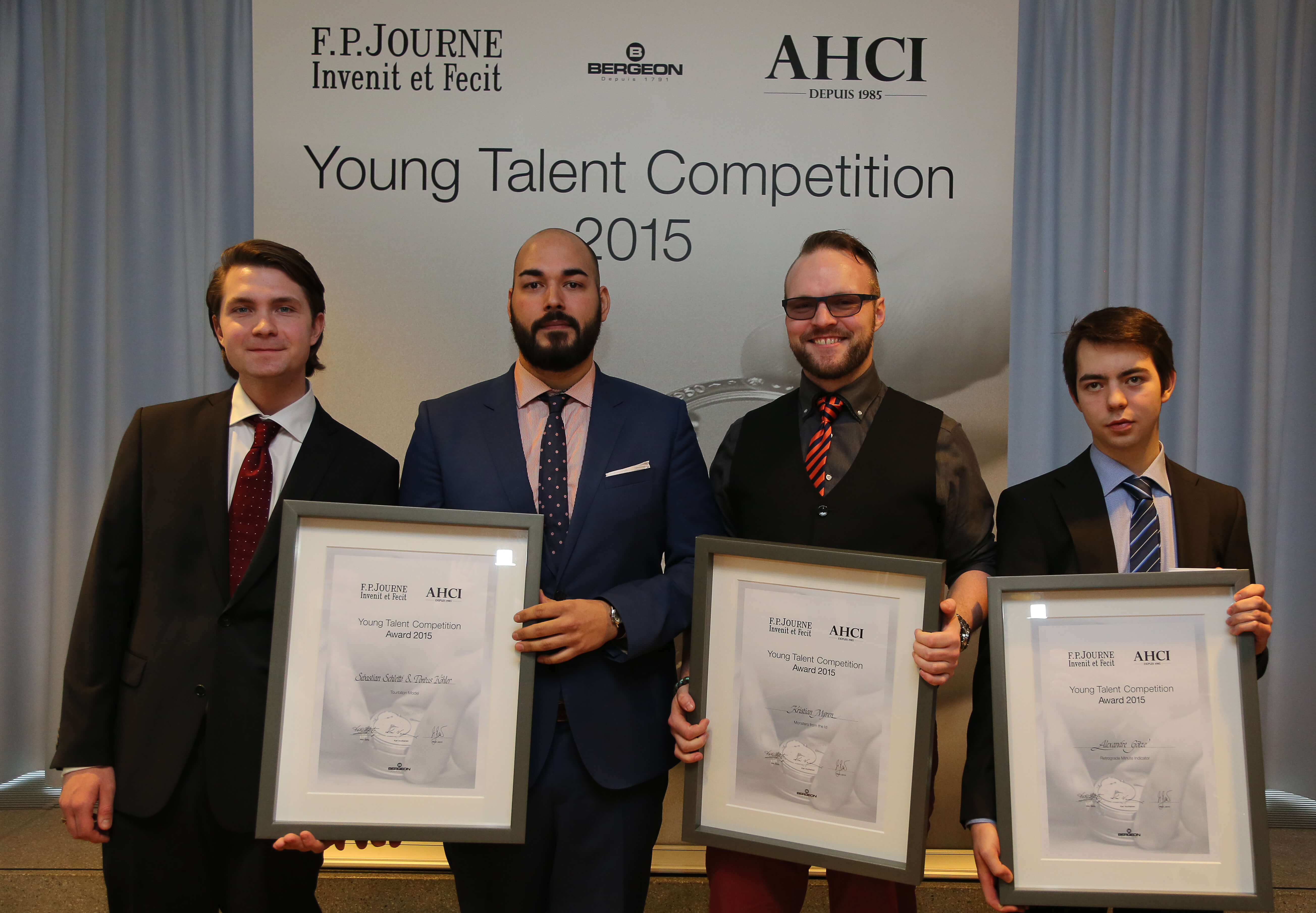