Skip to main content Skip to footer Skip to search
Filter
by category
Events articles
2019
NEW WORLD RECORD FOR AN F.P.JOURNE WATCH, THE ASTRONOMIC BLUE, SOLD DURING THE ONLY WATCH CHARITY AUCTION FOR CHF 1’800’000.-
Geneva, November 9th, 2019 - Unique prototype of a watch endowed with 18 functions and complications 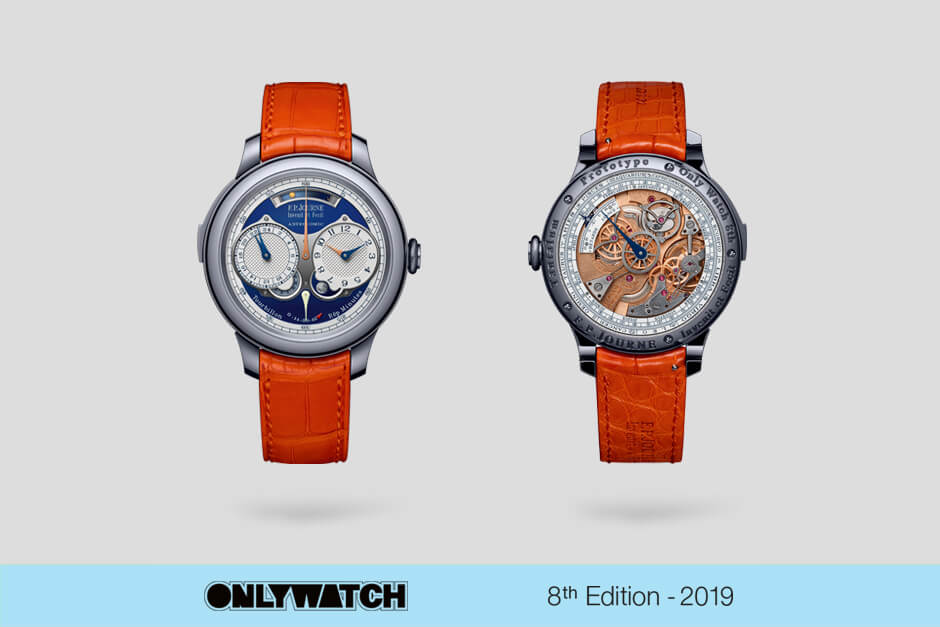 After the success of Only Watch in 2017, F.P.Journe is proud to announce a new world record for the most expensive F.P.Journe watch ever sold at auction. The Astronomic Blue, developed specifically for Only Watch, sold for the amount of CHF 1’800’000.- in front of a packed room in which the most important collectors from all over the world have mobilized for this charity event.

The unique prototype movement, with its unique blue chrome dial and its unique case in Tantalum makes the F.P.Journe Astronomic Blue a Haute Horology major work of Art.

This grand complication watch with tourbillon and minute repeater, equation of time, sidereal time, sunrise and sunset, moon phases, 2nd time zone and annual calendar, is dedicated to recall a long forgotten gesture. That of losing oneself in the stars to better find one’s way on Earth. There was a time when that poetic idea was not a paradox, but rather an obvious truth. And like the instruments that were once used for observing the stars, the Astronomic Blue is above all a tool. But instead of opening a window onto the celestial vault, it sets the stage for all types of time.

François-Paul Journe declares: « I am happy our watch has reached such an astounding price for a charitable cause. We have all committed to allow this unique timepiece to gather such an important amount of money for the Monegasque Association against Muscular dystrophy (AMM) to support scientific and medical research on Duchenne muscular dystrophy.»

Next articles
F.P.JOURNE opens its first Boutique in Dubai in partnership with Ahmed Seddiqi & Sons
Dubai, October 30th, 2019
CENTIGRAPHE ANNIVERSAIRE
17 October 2019 – Celebration of the 10th Anniversary of the F.P.Journe New York Boutique with a Limited Series of 10 pieces
F.P.JOURNE LATE AFTERNOON APERITIFS
On Tuesday 4 June 2019, F.P.Journe will launch the late afternoon aperitifs for all lovers of horology.
fermer