Skip to main content Skip to footer Skip to search
Filter
by category
Events articles
2017
Testimonial Mr Mori
F.P. JOURNE CAUGHT UP WITH MR. MORI (JAPAN) TO ASK HIM A FEW QUESTIONS ABOUT HIS EXPERIENCE IN THE 2017 MARATHON DES SABLES IN THE SAHARA, FAITHFULLY ACCOMPANIED BY HIS CENTIGRAPHE SPORT F.P. JOURNE. 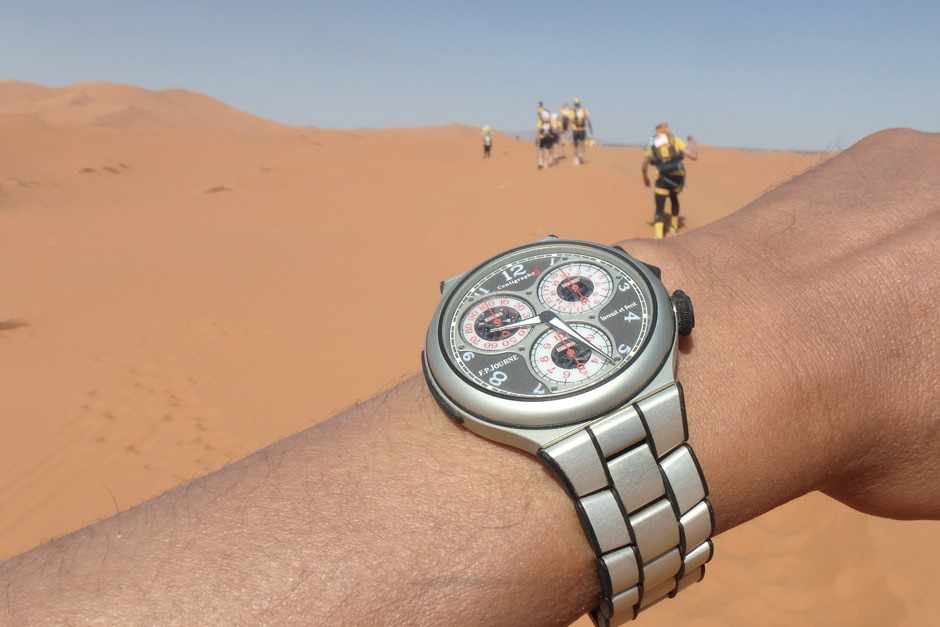 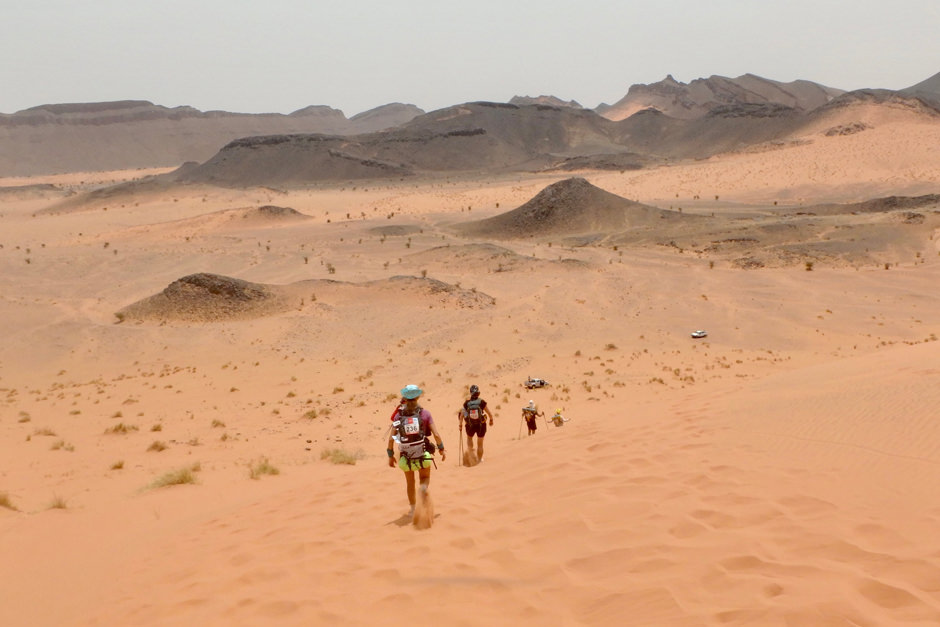 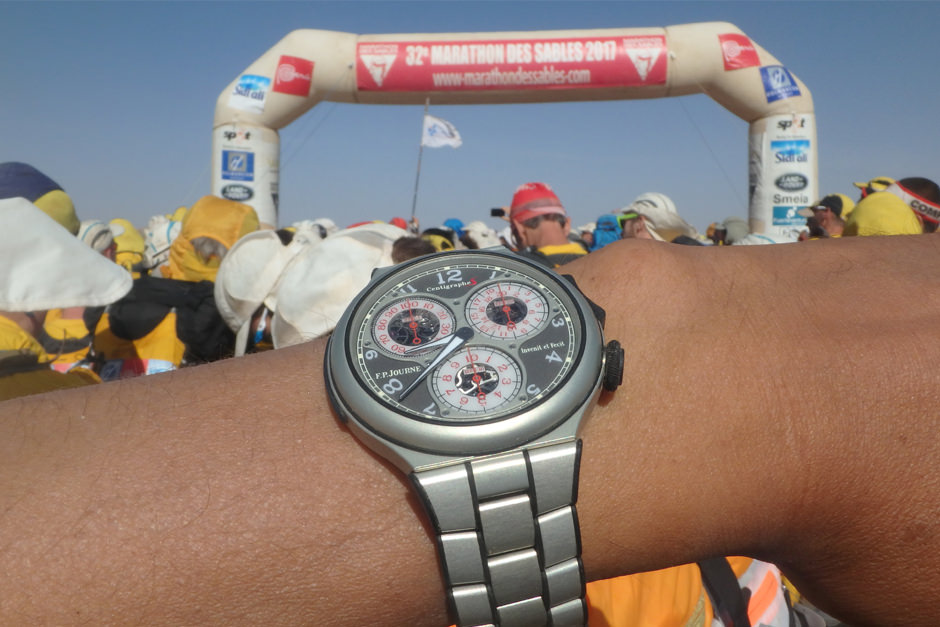 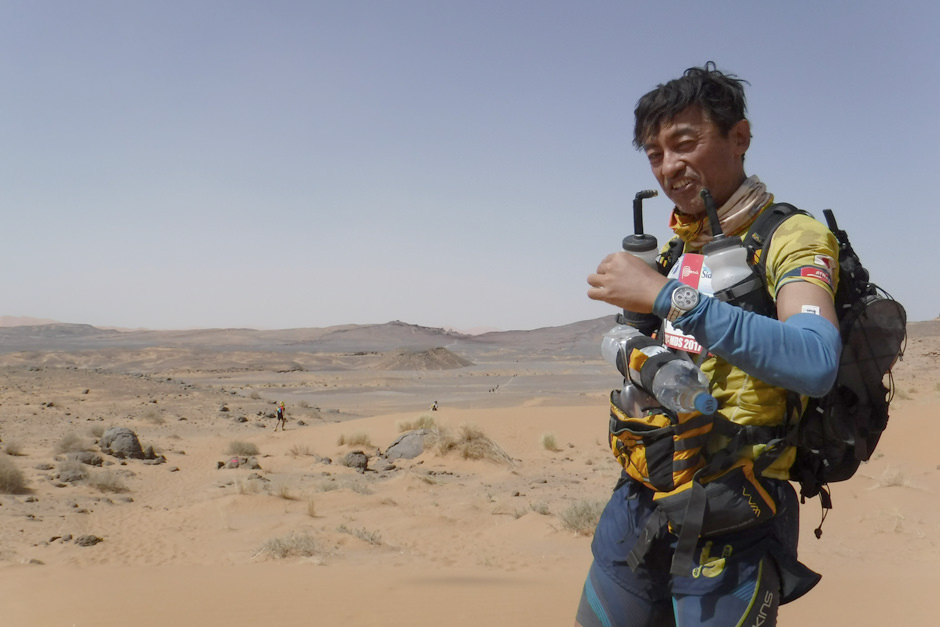 F.P.Journe is proud to count some extraordinary individuals among its customers.

One such person is Mr. Mori from Japan, who took part in the 2017 Marathon des Sables in the Sahara with his Centigraphe Sport, a seven-day marathon of 236km in extreme conditions.

F.P.Journe caught up with Mr. Mori to ask him a few questions about his experience and how his Centigraphe Sport held up.

FPJ: Sand, wind, heat, could, tiredness, constant effort … Why would you choose to take on such a challenge?

Mr. Mori: It was my dream to discover the magnificent nature of the Sahara, not only doing some sightseeing but also to feel the Sahara from the first day of running onwards. I had been training for a while, taking part in ultra marathons of more than 100km and in mountainous trail runs. Then I decided to take on the Sahara marathon (http://www.marathondessables.com) this year.

FPJ: Using a watch like this one is not usual for such an ultimate challenge. In preparing for an extreme race, how did you decide on the Centigraphe Sport?

Mr. Mori: When taking part in the Sahara marathon, we (the runners) need to choose a standard (analog/mechanical) watch, because most of GPS sport watches like Garmin or Suunto do not have a battery with a life of 7 days. I naturally decided to wear my Centigraphe Sport as it is the watch that I wear on a daily basis. (please link to the

FPJ: Has the Centigraphe Sport met your expectations? How?

Mr. Mori: My Centigraphe Sport worked perfectly as expected in all aspects: lightness, waterproof, dust protection from running in powdery sand and accurate time without the influence of temperature differences. The watch made it also easy to check the time even at night.

FPJ: What is your next challenge?

Mr. Mori: I am planning to take part in the Ultra Trail du Mont Blanc 171 km at the end of August 2018. utmbmontblanc.com

FPJ: Any other F.P. Journe watches you own/would like to own or admire?

Mr. Mori: I am very fortunate to live at the same time as François-Paul Journe and see that he makes what he likes. Out of sheer curiosity I would like to see how he would make a compass and a barometer.

Next articles
200'000 CHF FOR THE CHRONOMETRE OPTIMUM F.P.JOURNE, UNIQUE PIECE MADE SPECIALLY FOR ACTION INNOCENCE’S CHARITY GALA, GENEVA
10 May 2017 – F.P.Journe – The regularity of a Metronome

CELEBRATION OF THE 10TH ANNIVERSARY OF THE GENEVA F.P.JOURNE BOUTIQUE WITH A LIMITED SERIES OF 10 PIECES, THE CENTIGRAPHE ANNIVERSAIRE
4 May 2017 – The Anniversary Centigraphe celebrates the 10th Anniversary of each F.P.Journe Boutique