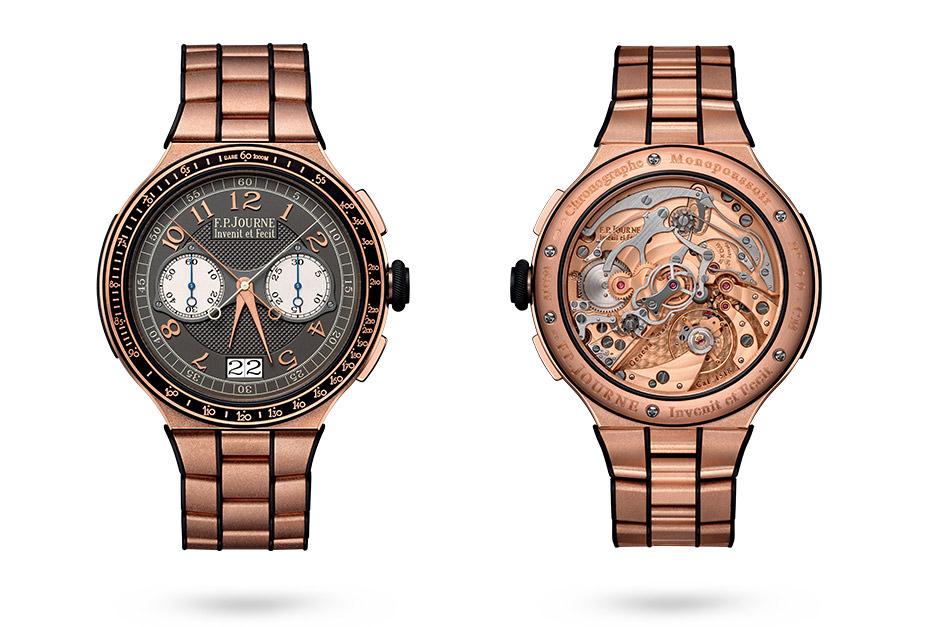 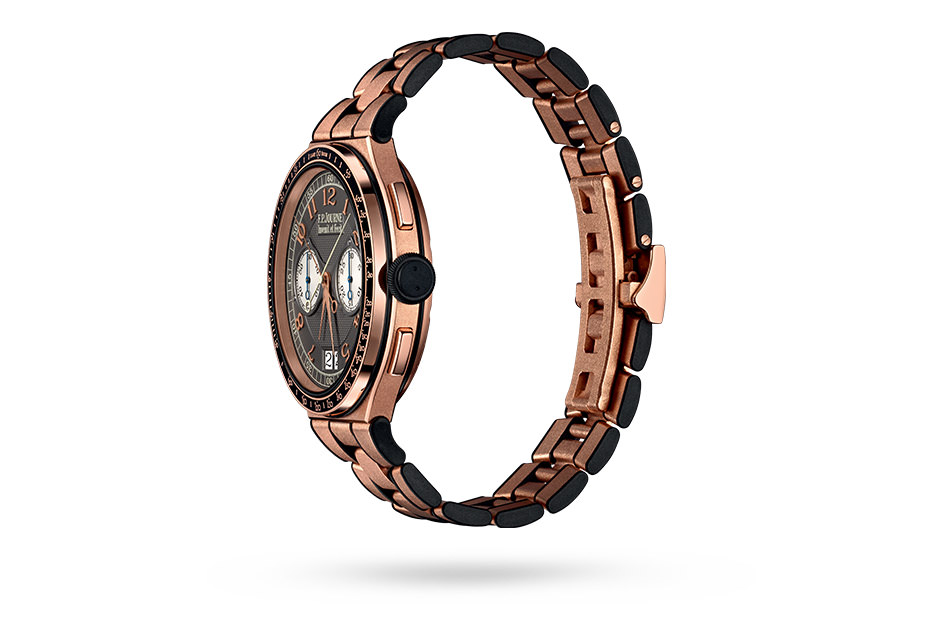 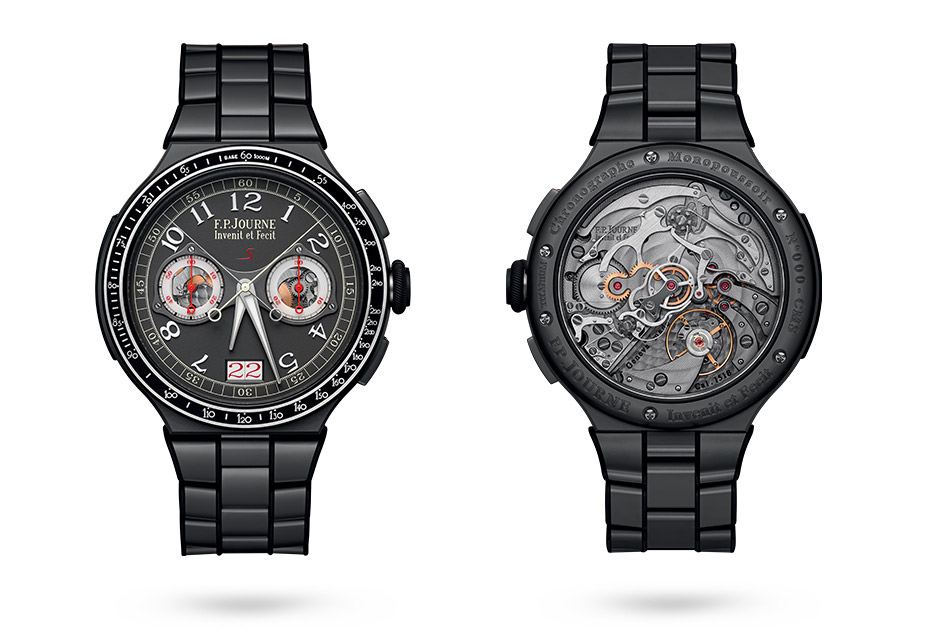 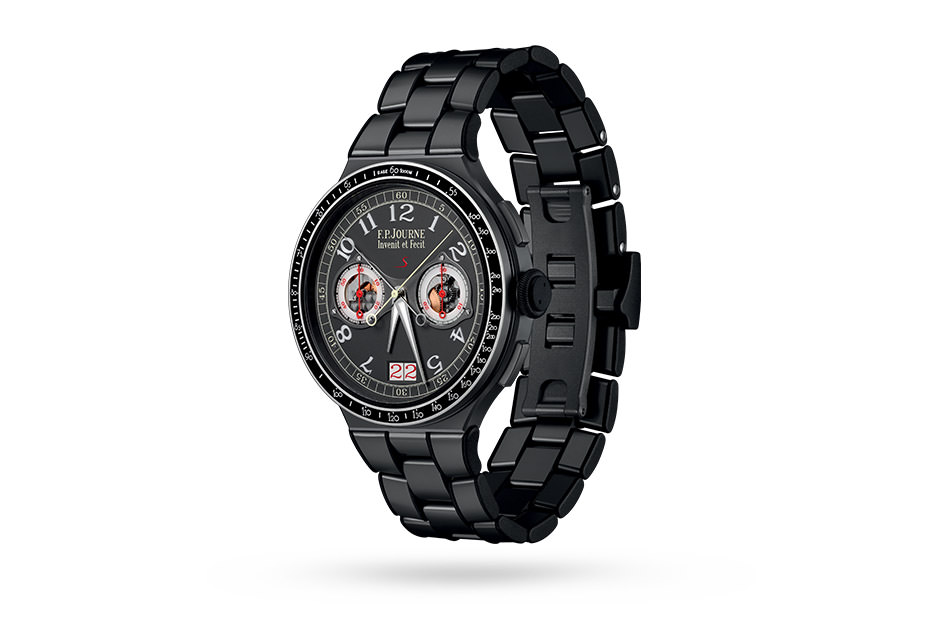 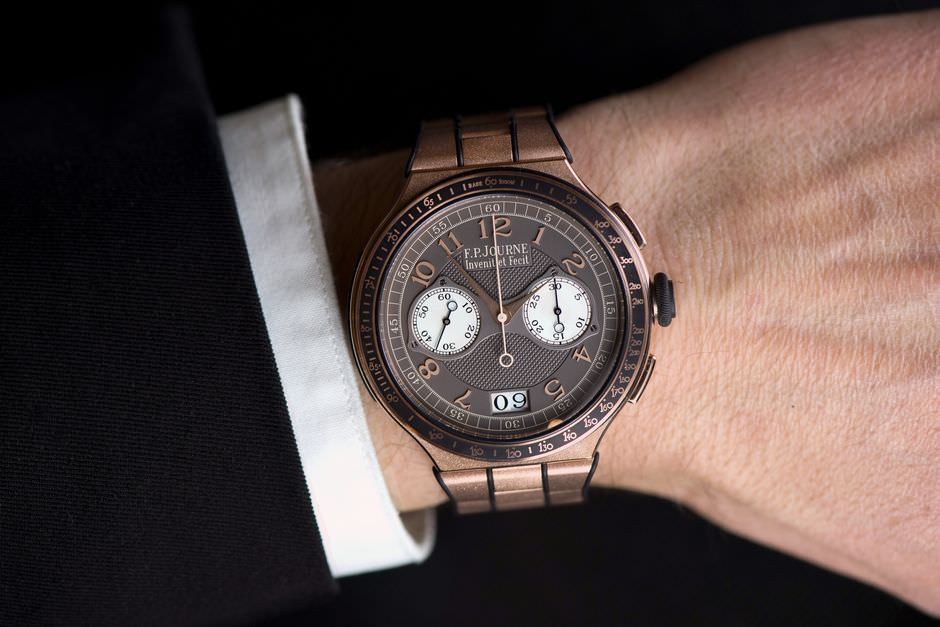 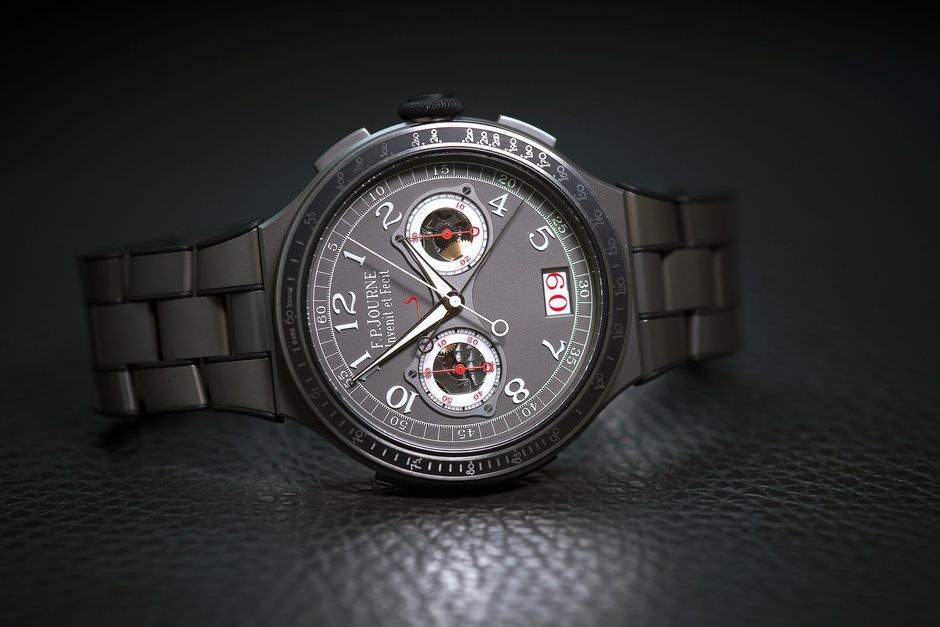 The case of 44 mm diameter and 12 mm thick encloses the new monopoussoir split second chronograph movement with a very large date, made in 18 K rose Gold for the Platinum and the 6N Gold versions and in Aluminium alloy for the Titanium version.

The precious metal bracelets are assorted to their respective case. Two new bracelets in Platinum and 6N Gold with matte finishing have been developed while the Titanium bracelet is identical to the existing lineSport version. Rubber inserts are fixed on the case and the bracelet links to protect the watch from frictions on smooth surface like bumpers of ancient automobiles. The links attached to the case are also articulated to adapt to the different wrist sizes with an adjustable folding clasp in length of approximately 5 mm.

This Chronograph features a power reserve of 80 hours making it possible to efficiently use the chronograph with the rattrapante function after 2 days and a very large date in a window of 5.20 x 2.80 mm provides an increased readability.

For each of the 3 versions, a dial of a different colour:

The tachymetric bezel inlaid with ceramic and the new typographic numeral are a reminder of the Only Watch timepiece.

A rubber overmolded crown with 3 positions:

The pusher are made in the same metal as the case:

This new calibre 1518 with manual winding, conceived by F.P. Journe, is as usual entirely made in our Manufacture and assembled by one of our watchmakers. F.P. Journe perpetuates the watchmaking tradition and maintains exclusive craftsmanship since every experienced watchmaker performs all the assembly stages from beginning to end, a unique case in the profession. Inspired by the Chronograph made for Only Watch, this new movement features a chronograph direct gearing with a rocking pinion avoiding the jump of the hand at the start. An important development was required to integrate the very large date in a total height of only 6.80 mm, signature of the F.P.Journe brand. The magnificent finishing and decorations of the movement visible through a transparent sapphire back are one of the numerous undisputable qualities of the F.P.Journe Haute Horology.

The Chronograph And The Split-Second Function

Talking about the word chronograph, you will probably think of Nicolas-Matthieu Rieussec. And for good reason, since he invented, in 1822, the mechanism for “writing the time”, which derives its name from the Greek chronos and graphô. Yet, summing up the history of the chronograph in this way would deprive you from the rest of this exciting story and the steps that led to the invention of the modern chronograph.

Even before contemplating to measure the time, instruments capable of displaying the time with extreme accuracy and to determine the seconds were needed. Research of astronomers, mathematicians and watchmakers is thus correlated. George Graham (1673-1751) seems to be the first to be interested in a mechanical solution for the division of seconds (theoretically 1/16 of a second) to then measure the duration of a phenomenon. Problems encountered: the device does not display the time and must be set to 0 and stopped manually.

The next step is the display of the independent second: an independent seconds-hand is incorporated on a mechanism displaying the time, by means of an additional gear train that allows displaying the time division(1/5 of a second for 18,000 vibrations per hour) with a start/stop function that does not influence on the watch functioning. While Jean Romilly, Geneva watchmaker settled in Paris presented to the Royal Academy of Sciences a watch with repeater and off-centered seconds in 1758, Jean-Moïse Pouzait proposed in 1776 an independent dead bet second watch.

Scientists for whom measurement of time was associated with many of their experiences, were particularly seeking for precision instruments. Louis Moinet, inspired by the work of astronomers and aware of their needs, offers in 1816 his version of a counter. This invention, which he named “compteur de tierces”, is described in his Traité d’Horlogerie of 1853 (Volume II, p. 430-431). With a seconds-hand showing the 1/60 th, that is a balance wheel beating 216,000 vibrations per hour, we can easily imagine the difficulties associated with this counter: lubrication, premature wear, energy consumption, etc... It should be noted that in this same treaty he doesn’t hesitate to largely quote the works of his peers at the time.

Meanwhile, soldiers sought to give more precision to their shots with these precision instruments. The works signed by Breguet also contain “military counter to count the troops’ pace.” These devices beat 76 times per minute instead of 60 times. We find descriptions thereof starting 1819.

Lighter but just as strategic aspects, especially for bookmakers, led Rieussec to his invention that gave his name to the chronograph, used in horse racing: it included an enamel dial that turned on itself in 1 minute. On this enamel dial was painted a scale of seconds stringing under a system that placed a drop of ink when a button outside the box was operated. This watch was writing the time, thus the name derived from the Greek “Chronos”- the time and “Graphô” - to write that gave the name used today “chronograph”, that should not be confused with the chronometer, qualifying a precision timepiece.

The system was improved, including by the watchmaker Frédéric-Louis Fatton, student of Abraham-Louis Breguet. His watch had a fixed dial and its seconds-hand had a small ink tank. This hand was fitted with a device connected to a button located outside the housing. By pressing this button, the hand deposited a fine drop of ink on the dial.

The report of the exhibition of French industry products of 1823 thus speaks about the work of Breguet and Rieussec. The latter received a bronze medal for his work.

As to the modern chronograph, Adolphe Nicole, from Vallée de Joux but practicing in London under the trade name Nicole & Capt, invented in 1862 the system that allowed rewinding the seconds-hand to its initial position after stopping it. It fitted his zero-reset mechanism with a heartpiece, a component still used nowadays. Complication particularly sought for its functionality, the chronograph has continued to modernize up to our days. Extremely complex to implement, it requires great precision in its construction in order to provide an accurate reading of the time. Today, François Paul Journe is part of the lineage of the great watchmakers of the 18th century and contributes to progress with the launch single-button split-second chronograph.

The split-second function for a faithful reading of an interval:

For a more precise and comfortable reading of these precision instruments, it quickly became essential to stop the hand showing the intervals.

In 1827, Louis-Frédéric Perrelet innovates with a two seconds-hands watch. One of the hands could be stopped at will and by a second press on the same button, the hand was catching up the first hand that had continued its functioning.

Around 1831 Joseph-Thaddeus Winnerl invented a system of “split-second” that was stopping the seconds-hand, then this hand could catch its stop time, provided that it didn’t exceed 30 seconds. The characteristic of this first system called “nib” and of the second system that he would invent later, this time fitted with two overlapping seconds-hands, is that they are based on the seconds wheel and not on the chronograph’s mechanism.

We shall also refer to the works of Henri Robert, author of various articles of the Modern Encyclopedia, reported by the Société d’Encouragement, in 1833, with the precise description of a “chronometric counter and travel alarm clock” whose characteristic is the split-second mechanism in a register at 12 o’clock (see the picture).

It was around 1880 that the split-second function appeared in its current form. While there have been many chronographs manufacturers begining with this period, the names related to the flyback hand are much fewer. And when talking about the flyback hand, we automatically think of the most complicated parts, such as, for example “La Merveilleuse" of Ami Lecoultre, produced in collaboration with Louis-Elysée Piguet, who received the bronze medal at the World Exhibition in Paris in 1878.

Vidéo Youtube
François-Paul interviewed on the Chronographe Rattrapante
Next "Inside F.P.Journe" articles
fermer